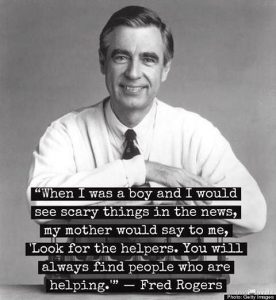 Last week I had the pleasure of seeing the newly released documentary – “Won’t you be my Neighbour?” highlighting the life of the remarkable Fred Rogers. Growing up in the U.K., I had not been exposed to his long-running children’s TV programme and was slightly confused at first. However, I was soon drawn in by his captivating manner, endearing puppets and, above all, his practice of all the values we hold dear in Values and Visions.

Most notable was his affirmation of children: every one was made to feel special; “a unique individual of infinite potential”, our premise in the first edition of Values and Visions. Later in his life Rogers was criticised for this and accused of fostering an entitlement culture. This is a distortion of the truth. He cared deeply about children and understood what it is like to be a child in our confusing, every-faster-moving world. His affirmation made them feel secure and safe. As Tyler Huckabee says, “When Mr. Rogers called you special, it didn’t feel like entitlement or mindless praise. It felt more like a responsibility—like he was reminding you to live up to something” (Huckabee, 2015). This echoes our work on affirmation in our section on Self. Our activity ‘IALAC (I Am Lovable And Capable) is almost a paraphrase of Rogers’s own words:

You know, I think everybody longs to be loved, and longs to know that he or she is lovable. And, consequently, the greatest thing that we can do is to help somebody know that they’re loved and capable of loving. (Rogers, 2003, cited in Huckabee, 2015)

Rogers, like us, also felt it important to remember those who have helped us through life. Rogers was famous for ordering people to take time (and he would time them) to reflect on who had made them who they are. In V&V we use the timeline of influence as a tool for reflection to do this. Children chart key events in their life and add the names of those who have encouraged or supported them. They take time to think about the qualities and gifts these individuals have nurtured in them, helping them to become who they are. He paired this with urging us to be aware of the impact we have on others, the way we can influence. This marries with our work on Story and is encapsulated in activities such as ‘Heroes’.

Time was a feature Rogers focused on. He liked to use a stopwatch to get children to learn how long a minute is. V&V does this in our ‘How long is a minute’ activity, using silence and stillness to gain an understanding of time in our hectic world. Rogers also valued silence and spoke movingly about its power. Silence is a key feature of V&V. We recommend it being the starting point for most of our activities. Thich Nhat Hanh’s ‘One-Minute Mediation’ is a favourite of ours or just simply, “Take a moment to…”.

The many parallels between Rogers’s philosophy and that underpinning V&V are striking. What is particularly interesting is how he never gave up. Having made the decision to cease producing his series, he came back with new programmes to address issues he knew would frighten and confuse young children, for example 9/11. He wanted to help them make sense of what they were hearing and seeing on the television. This is a key element of V&V: focusing on the here and now and understanding grief and sorrow.

What is of concern in the documentary is the message that the world is moving increasingly faster and the pressure on children escalating exponentially. Rogers died in 2003. The film raises the question, “What would he do today?” This is where Values and Visions comes in. We address those issues face on. We take young people through a cycle beginning with their experience in the here and now. We guide them through reflection and support them in developing their purpose and action. In short, we enable young people to develop meaning and purpose in a volatile world.

If you have the chance, do see this film, and watch the life of a man who embodied Values and Visions.

View the official trailer for the film at this link – Won’t You Be My Neighbour?